Meet A Real-Life "Rosie The Riveter" 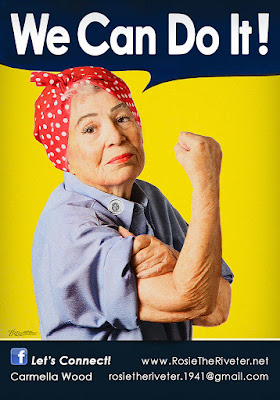 Before she walked into my studio, I knew Carmella Wood was a special lady. While affectionately known as Aunt Millie to many, she is actually best know as a real-life Rosie The Riveter. Rosies, as they are collectively called, are women who worked factory jobs during World War II and bolstered the war effort, and subsequently the role of women in American society.

Even before she ever was a Rosie, Carmella already had a strong sense of self. As the eldest of five, she grew up helping others and believed in her abilities. When WWII broke out, Carmella knew she wanted to do her part and serve her country. As a women, she could not enlist, so she did the next best thing. She went to work on the home front. Armed with a power riveting gun, Carmella worked over the next two years on three configurations of the Corsair bombers in East Hartford, Conn. not unlike the Rosie character first mentioned in a 1942 tune:

Today, at the age of 93, Carmella is still going strong! And in more ways than one, she is the very picture of a model Rosie.

Inspired, her nephew approached me about photographing Carmella and otherwise recreating the Rosie character from the now iconic poster. Always up for a challenge myself, I agreed to the session. And, once I looked Carmella in the eye and shook her hand, I knew we could do it!

While the true story of Rosie isn't about any one woman, Carmella Wood will forever be Rosie The Riveter to me. And, she can be your favorite Rosie too. Like her Facebook page and like an American Hero!

- Tammy
Posted by TRR Photography at 9:25 AM No comments: