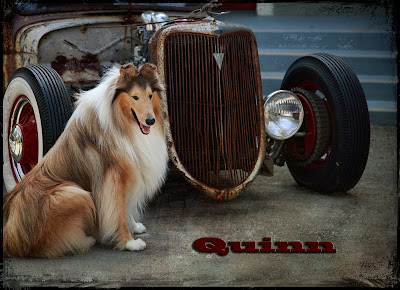 It had been four years since I last attended a National Specialty Show of the Collie Club of America, and true to the show's slogan: Hooray for Hollywood, the show committee did not disappoint.

The week was packed with events for every type of Collie fancier under the warm California sun from agility to conformation as well as those of a more social nature. One of my favorites was the live auction benefiting the Collie Health Foundation. With Bob Kelly serving as auctioneer and Gayle Ann Stepanik and myself once again in charge of the display tables, the event was both entertaining and festive. And, yes, I did end up the lucky bidder on at least one item. 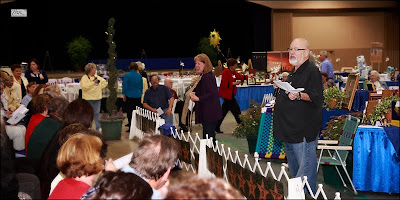 Outside the ring, I had the best time photographing a young rough sable and white dog, call name Quinn, from Texas. His owner, Therese Holmes-Terrell, has high hopes for this boy and for good reason. I have no doubt that by this time next year, he will be an AKC champion. At which time, I will be able to say I knew him when...

The climax of any dog show, however, is the Best In Show (Best Of Breed at a National) judging, and my friend Judge Carl Williford made it just that by bringing his own class act to the ring. Carl himself had been looking forward to the moment for two years--since first being elected by his peers to officiate. For the final showdown, there were two dogs (males) standing in the ring, a smooth sable and a rough tri-color. Before a full house, it would be the latter, Ch. Fantasy's Rising Dragon, that would receive Carl's nod, the accompanying fanfare, and make Collie history.

The next thing I heard was the show announcer calling the 2010 National a wrap. And, all cheered, Hooray for Hollywood!
Posted by TRR Photography at 2:18 PM No comments: